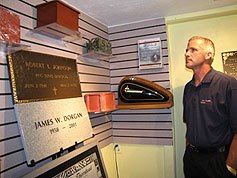 Cascade Monuments & Urns, located in Bellingham, Washington, provides monuments designed and manufactured locally. We have created monuments with a passion for excellence. Today, we ship monuments throughout the entire U.S. and Canada.

Behind every one of our monuments is a level of professionalism not visible to the eye.

Owner, Rinne Cain, acquired his monument apprenticeship in Whatcom County through Fussner Monuments. Whatcom County is a place where you will find a beautiful Bayview scenery. We are located one mile south of Greenacres memorial park & Ferndale Jones-Moles funeral home, at 1118 W. Smith Rd. Our affordable prices, artistic work & craftsmanship are second to none.

Cascade Monuments & Urns use the finest manufacturers in the United States. We work with funeral homes & cemeteries throughout the U.S. We also work with the most reasonable priced burial & cremation services in Washington State. Rinne's goal is to save families money while still providing a high-quality product.

Cascade Monuments is now a Preferred Shipper for Alaska Airlines. Shipping is available anywhere in the U.S. and Canada. Cascade Monuments & Urns will deliver to families in Oregon, Washington, Idaho, and BC, Canada.

View Our Featured Article by BBJ 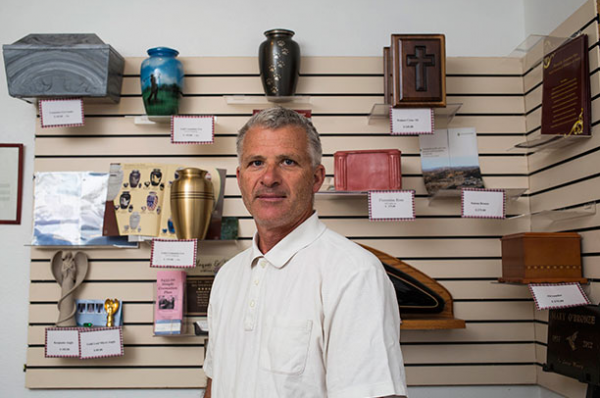 The changing face, and business, of death: Meet the people working and building companies in the funeral industry

Everyone will have to deal with it. No one wants to talk about it.

Some people make their careers, build businesses and spend their professional lives dealing with death.

When a person dies, it’s a tragedy for that person’s loved ones. It’s also big money. In 2012 in the U.S, cemeteries, crematories and funeral homes made more than $16 billion in revenue, according to the National Funeral Directors Association. It also estimates that in 2014, the median price of an adult’s funeral was $7,181 for a burial and $6,078 for a cremation.

Rinne Cain got his first taste of the industry in 1985.

They went to the local funeral home, which charged him $900 for a headstone over a series of monthly payments.

He later found out that headstone cost the funeral home $90.

“I just figured there’s a niche and I need to fill it,” he said.

He sells headstones, caskets and urns – the same ones you can get from the funeral home, but he sells them for a fraction of the cost. Click Here To Read More